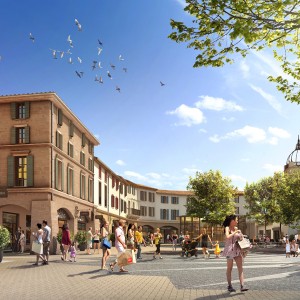 McArthurGlen Designer Outlet Provence – McArthurGlen’s new centre in the south of France – is one step closer to becoming a reality following the confirmation, on 23 June, of the scheme’s retail licence by the Conseil d’Etat, France’s supreme court, which means that this retail licence is confirmed and final.

McArthurGlen Provence is located in the second most visited tourist destination in France after Paris – the region of Provence-Côte d’Azur. Located near the town of Miramas, the centre is close to the junctions of the A8, A7 and A54 motorways, and a 45-minute drive from Aix-en-Provence and 50 minutes from Marseilles, with a high-speed TGV train station within walking distance of the centre.

Around 3 million potential customers live within a 60-minute drive of the centre, with more than 30 million tourists visiting the south-east of France annually. The centre, which is expected to welcome around 2.5 million consumers a year, will see the creation of around 600 jobs, with further, indirect employment expected to be generated, in particular in the tourism industry.

McArthurGlen Provence, with 25,000 sq m of gross leaseable area, will offer the most sought-after international and national names in luxury, designer and lifestyle fashion, with year-round savings of 30-70 per cent – all in a premium shopping environment, with the design and architecture reflecting the local Provencal style.