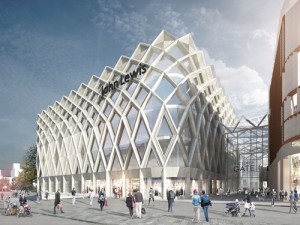 The first major construction milestone for the £150m Victoria Gate retail development is underway, as piling works for the 24,000m² John Lewis department store, one of the largest outside London, commenced at the official groundbreaking ceremony.

Margery Davey, from Adel, who won the Victoria Gate groundbreaker competition joined senior representatives from retail developer Hammerson, Leeds City Council and construction contractor Sir Robert McAlpine to officially mark the event by pushing the button on the piling rig to start work on the foundations.

The piling process is essential to the delivery of Victoria Gate, as it sets deep foundations to enable the arcade and John Lewis building to be supported. To support the John Lewis building 410 piles will be required which will be filled with concrete and in mid July, piling for the arcade will commence with 503 piles. The depth of the piling shafts for the foundations total 12,000m, the equivalent of 30 running tracks and over 5,000m³ of concrete will be poured into the piles – enough to fill two Olympic size swimming pools.

Margery was chosen to become a part of Leeds’ retail history for her tireless work in the local community, including running the Kidz in Kampz Community Charity shop in North West Leeds. Kidz in Kampz provides essential funding to assist the education and welfare of children living in camps for displaced people along the Thai and Burmese borders. Margery’s work has also inspired a community outreach project that works in partnership with Housing Leeds and the Sanctuary Housing Association.

The eagerly awaited Victoria Gate retail development, due to open in Autumn 2016, will feature a 21st century-inspired retail arcade, which builds on the city’s arcade history, featuring up to 30 stores, restaurants, cafes, a casino and multi-storey car park for up to 800 cars.