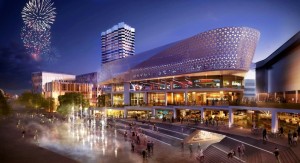 This is the cinema’s first location in the South and it is the first brand to be announced for the new leisure scheme.

Screen giant National Amusements has over 950 movie screens in the US, UK and Latin America and will operate under its Showcase Cinema de Lux brand.

The proposed 10-screen digital cinema will form a key part of the new leisure offer at Watermark WestQuay, which will also include 20 new restaurants and an exceptional new piazza for the city.

From premium seating to a large format screen, the Showcase Cinema de Lux will bring the best of movie-going to Southampton. Guests will experience cutting edge audio visual technology, including 4k projectors, 3D in every screen, and the very latest in Dolby digital surround sound. The Cinema de Lux will also offer a full service bar and a wide range of hot food, in addition to favourite cinema snacks.

Guy Wells, Development Manager for Hammerson commented: “To secure the first Showcase Cinema de Lux for the region at Watermark WestQuay is fantastic news. The new brand will deliver an exceptional entertainment experience for our visitors, delivering the very latest blockbuster films in surroundings that complement the new leisure offer for Watermark.”

Shari E. Redstone, President, National Amusements, Inc said: “We are thrilled to introduce Showcase Cinema de Lux to Southampton and to partner with Hammerson on this new project. The superior entertainment experience Showcase Cinema de Lux offers is one you can’t find elsewhere, and the exciting plans for Watermark WestQuay will make this location very popular with cinema-goers.”

Watermark WestQuay is the centrepiece of Southampton City Council’s VIP ‘Heart of the City’ project, as identified within its City Centre Master Plan that promotes its vision for the city.

Councillor Stephen Barnes-Andrews, Deputy Leader of Southampton City Council, said: “Watermark WestQuay will invigorate the leisure economy within Southampton, in particular the night time economy. As well as providing a fabulous new facility for the city, residents and visitors alike, Watermark WestQuay will also bring hundreds of new jobs. I am pleased to hear that the new cinema operator will also be a first on the south coast, once again proving that Southampton is the place to be; the south coast city of choice.”

Work on Watermark WestQuay will start on site this autumn with the development opening in autumn 2016.