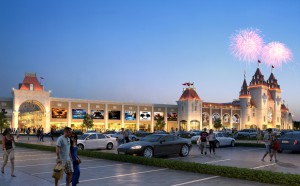 The project is being implemented within the framework of an exclusive licensing agreement between REGIONS GC and DreamWorks Animation studio.
In Saint Petersburg, the park will be located in the Krasnogvardeysky District, at the intersection of Shafirovsky Avenue and Industrialny Avenue.
The project’s coverage area will include 7 million people, not taking the flow of tourists (6 million people annually) into account.
The park will recreate the world of DreamWorks animated films and feature numerous attractions, spectacular live shows, themed restaurants and many other things.
In addition to the park, the mixed-use complex will also feature a retail and entertainment center, a multipurpose concert and movie hall, a multiplex with an IMAX screen, a park and garden area with a themed sculpture park, ponds, and fountains. The total area of the theme park and themed retail area will exceed 200 thousand sq. m.
The park will feature convenient transport accessibility, with central highways (KAD, Shafirovsky Avenue, Industrialny Avenue, Avenue Kosygina) and two metro stations (Ladozhskaya, Akademicheskaya) located in close proximity to it. Plus, direct access to Finlyandskiy and Ladojskiy railway terminals will be provided.
Daily visitor traffic at the complex is expected to be 50 thousand people.