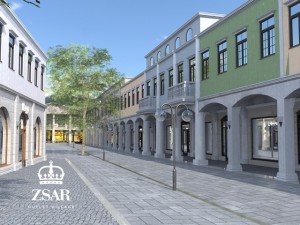 Zsar Outlet Village – tapping into the explosion in demand for brands in Russia.

Located in South-Eastern Finland just 500 meters from the Russian border, Zsar gives premium brands a unique opportunity to target the massive Russian consumer market without any of the risks of operating in Russia. Opening in 2016, it is the first outlet village in Finland.

Zsar enjoys a key location in the midst of massive Russian tourist flow to and from the EU. Tax-free shopping gives an advantage to attract the wealthy and brand conscious Russian shoppers.

The Finnish Border Guard estimates that the number of border crossings within 1 hour drive range from Zsar will grow from the current 10,5 million to 18 million by 2017. The total catchment area is 8,5 million inhabitants within 200 km radius, including the fourth largest city in Europe, St. Petersburg, and the Finnish capital Helsinki.