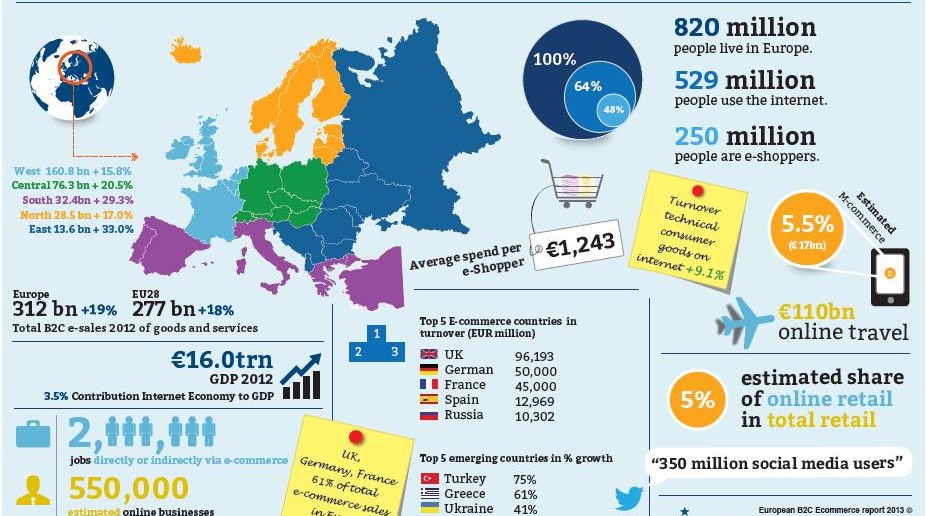 European e-commerce is booming. This is apparent from the new European B2C Ecommerce Report published by Ecommerce Europe, the European umbrella organisation for online retailers.
By Johannah Cantwell on June 5, 2013 0 Comments

According to Ecommerce Europe, The European e-commerce industry is clearly dominated by three leading countries: the UK (€96 billion), Germany (€50 billion) and France (€45 billion). The total of €191 billion of these three countries together represents 61% of the total European B2C e-commerce sector and 69% of the EU28.

Impact of the Internet (including e-commerce) on the European Economy: The total Gross Domestic Product (GDP) of Europe in 2012 is estimated to have reached €16 trillion, of which the GDP of the EU28 was just over 80 per cent. Ecommerce Europe estimates the share of the European Internet economy at 3.5%, a percentage that is set to double by 2016 and to triple by 2020 given the fact that the Internet economy grows much faster that the economy in general.

The number of jobs created directly and indirectly by the B2C e-commerce sector is estimated at 2 million in Europe, a figure that will grow with the on-going increase and penetration of online in society, and the projected growth of B2C e-commerce.

Ecommerce Europe estimates the number of B2C websites to have grown to 550,000 at the end of 2012, growing at a pace of 15 to 20% per year and set to grow even more given the growth foreseen in theupcoming markets in the South and the East such as Spain, Italy, Poland, Russia, Ukraine and Turkey, where B2C e-commerce is rapidly closing the gap with the more mature markets in North, West, and Central Europe.

Postal and private operators have reaped the fruits of the impressive growth over the past years of B2C ecommerce. Ecommerce Europe estimates the annual number of B2C parcels sent to customers domestically and across borders to other (European) countries at 3.5 billion, a number that will certainly continue to growwith the increase forecasted for B2C e-commerce in Europe.

European e-commerce is growing steadily every year, outpacing growth in traditional retail and services. B2C e-commerce represents one of the major drivers of the ailing European economy. However, there are large differences in development between the mature markets in the North and the North West, and the emerging (though rapidly catching up) countries in South, Central and Eastern Europe, led by Russia,Turkey, Poland and Ukraine..