23637
Retailer of the Week: HAPPYCHIC - Beyond Retail Industry

Retailer of the Week: HAPPYCHIC

Clothing retailing has always been a safe bet for investors. Discover how French ready-to-wear group HAPPYCHIC – the umbrella identity behind well-established brands Bizzbee, Brice and Jules – succeeded in its omnichannel transformation.
By MAPIC on July 3, 2015 0 Comments

“One of the biggest challenges – and opportunities – facing the apparel industry in 2015 is how best to embrace the omnichannel retail model [to]improve the shopping experience“, clothing industry research portal Just-Style predicts. It’s a well-known fact that an increasing number of shoppers prefer to buy online as most of the retailers’ catalogues are now available at their fingertips. That being said, claiming that the traditional brick-and-mortar stores are declining – or even dead – would be a hasty statement as an article by Planetizen confirmed. Rather, retailers actually have to leverage multiple channels in a consistent and well-thought-out strategy. 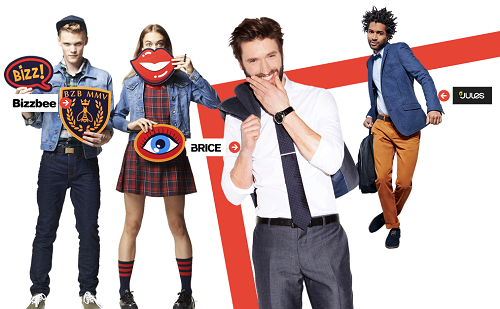 This is something French ready-to-wear group HAPPYCHIC understands very well. Founded in 2009 as part of the Association Familiale Mulliez, the organisation controlled by the Mulliez retail mogul family that owns – among other things – the Auchan hypermarket chain HAPPYCHIC is the umbrella identity under which three brands operate: Brice, Jules and Bizzbee. A common thread that runs through these multiple ready-to-wear identities is fashion at an affordable cost. Through its three brands, HAPPYCHIC offers a wide range of apparel, targeting a large scope of customers. Bizzbee (65 stores in France) addresses the needs of 15-25 youngsters with a strong pop/rock influence. Jules (400 stores in 13 countries) dresses fashionable men from 18 to 40 while Brice, the oldest brand established with 230 stores across 5 countries, provides a smart yet casual look.

HAPPYCHIC devotes significant attention to providing its clientele with an omnichannel shopping experience. Customers can conveniently shop in store or order online. A mobile app can also be downloaded, which features a dematerialised loyalty programme, a wishlist and a system that enables shoppers to flash a product’s barcode and get all the information about it (pictures, sizes, colours and more).

The HAPPYCHIC group today consists of 695 stores spread over 14 countries. The firm generated a turnover of €717 million in 2014 and is looking to pursue its international expansion strategy in fast-growing markets such as Russia, the MENA region, China and Southeastern Asia.

★ Participate in our next exclusive MAPIC meetup in New-York City on 14 July to meet and learn from the industry top experts!