Canadian quick service brand Tim Hortons is planning a major expansion strategy in the UK, hoping to capitalise on increased demand for drive-thru dining, as part of its fast food global expansion.
By Mark Faithfull on January 25, 2021 0 Comments

Tim Hortons UK & Ireland said it hopes to open a restaurant location in “every major city and town” over the next two years and the growth could create around 2,000 new jobs, the fast food franchise operator said, with an outlet opening in December last year at Milton Keynes the first in a “continuous roll-out”.

Tim Hortons opened its first UK quick service restaurant location in 2017. It is known for its coffee and doughnuts and now has 23 British locations, including Glasgow, Belfast, Manchester and the Midlands. The next opening is a circa 250 sq m store planned in Milton Keynes and a mall outlet at British Land’s Kingston Centre, just outside London. The company’s decision to “aggressively pursue” expansion plans follows a 37% year-on-year jump in sales in the UK and Ireland in the most recent quarter, the franchise operator said.

Founded as a single location in Hamilton, Canada in 1964, Tim Hortons is one of North America’s largest quick service restaurant chains and as part of its fast food global expansion now has over 4,800 restaurants located in Canada, the US and around the world, with locations including Thailand, China, across the Middle East, the Philippines and Spain. 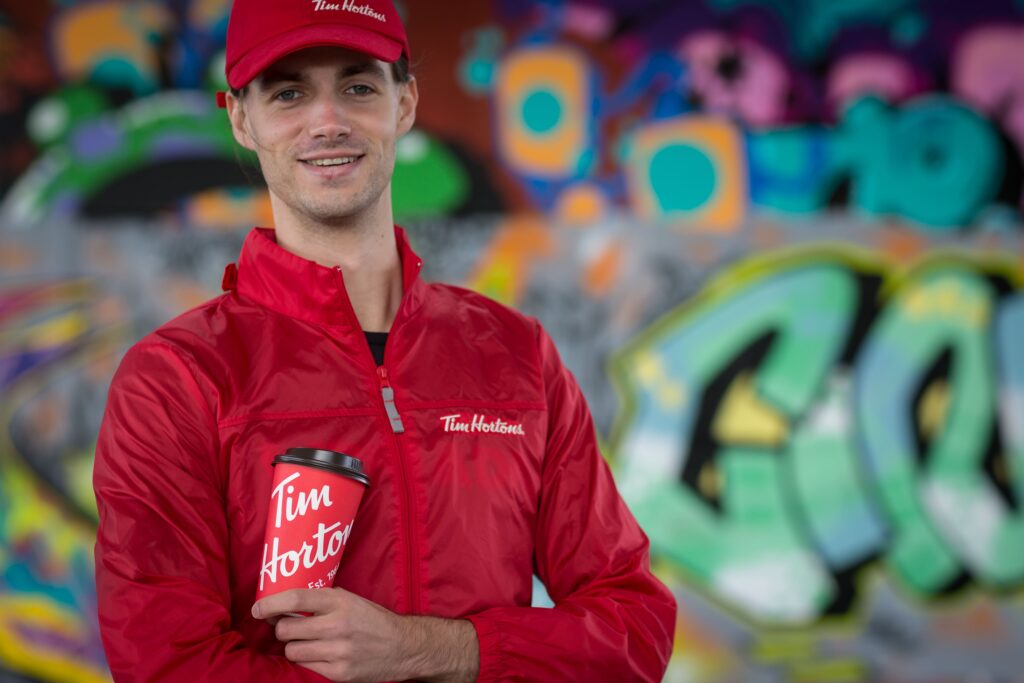 The quick service brand is owned by fast food giant Restaurant Brands International (RBI), which also owns Burger King and Popeye’s Chicken. Together, the company has more than 27,000 restaurant locations globally, which it operates through a franchise model.

“Despite challenging times for the sector, our drive-thru and flagship locations have delivered exceptional performance and our model is proving to be well attuned to the evolving needs of customers at this time,” said chief commercial officer Kevin Hydes.

The recent pandemic has driven a spike in demand for our drive-thru restaurants and as a key part of our accelerated growth strategy, we will be actively looking for leasehold and freehold opportunities across the UK & Ireland.

“Having completed our testing of a number of formats, we feel this is a real opportunity for us to offer the best of QSR and become a leader in the marketplace.

“We have a dedicated acquisition and construction team behind us supporting our ambitious growth plan, and our arrival in the south is just the start of our planned expansion throughout the U.K., with many more exciting openings in the pipeline for this year and beyond”.

The quick service firm has been eager to push forward fast food global expansion of its restaurant location footprint, especially outside the US and Canada. In August 2020, chief executive Jose Cil said that the firm remained focused on that goal, despite the upheaval caused by the pandemic on the fast food industry.

“We cannot predict exactly when the dust will settle, but we’re confident that we will be well-positioned to capitalise on opportunities for growth as we emerge from the crisis and continue toward the 40,000 restaurant goal we talked about last year,” chief executive Jose Cil told investors at the quick service company’s most recent update.

The quick service firm ended 2020 with roughly the same number of restaurants as the year before, despite unusually high numbers of restaurant location closures.